Hello internet people! First off, I want to thank you all, because I’ve officially broken 1000 page views. While perhaps not the most massive achievement in the history of the internet, I’m very pleased to see it. After a moment of celebration, let’s move on to the good stuff, shall we? 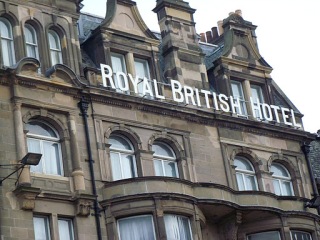 This past weekend, I found myself in Edinburgh. Which, if you didn’t know, is in Scotland! We mounted a single coach this time, drove for six hours, stopping briefly at the border to take photos of a very exciting rock that said Scotland on one side and England on the other, and then lo and behold, we were there, at the Royal British hotel in glorious Edinburgh. Emily and I hoisted ourselves up the stairs and dropped off our things in the room before heading out in search of adventure and, of course, food.

The thing we quickly learned about Edinburgh was that not only was it beautiful and full of old stuff, it was compact. Most everything was in easy walking distance, especially since we had done London on foot without much complaint only a few weekends ago. We stopped in to a cute little pie shop by the name of Auld Jock’s to have a cup of tea (or hot chocolate for Emily) and rest our weary (cold) bones. From there we explored, popping in to a few shops to look at Scottish things (such as kilts, family crests, etc). Emily was on the grand mission of encountering her family crest, which she did eventually manage to uncover. 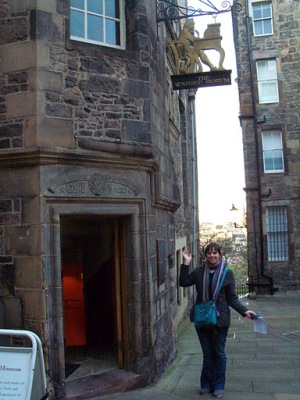 Our other mission was the find the Writer’s Museum, a small a lovely little building dedicated to the memory of some of Scotland’s most famous writers, such as Robert Burns and Sir Walter Scott. There I got to look at old notebooks and other artifacts that belonged to those in whose footsteps I am loosely following, if in an American, female, and modern way. Naturally, I had to take a photo with the sign. Perhaps a hint of things to come… a long, long time from now, of course!

Popped in to a little Italian restaurant for dinner–paninis, of course, which were delicious. I then had my first experience with GELATO, which was delicious. My child size came complete with a bear shaped wafer, which was glorious.

From there, we headed off to do some more exploration until we decided to take up an offer for a free ghost tour. If you didn’t know, ghost tours are big in Edinburgh, due to the prevalence of little lanes, called “closes”, which give a spectacular creepy effect. There is also an underground area which is probably effectively spooky. However, being college kids on a budget, the 8.50 general entrance fee for most of the more famous ghost tours made us ache, so we took this one instead. Although there were no underground excursions, we did enjoy a quite funny host dressed up as William Brodie, who told us some rather creepy tales and kept up a lively comic relief. As nothing in life is free, he asked for donations at the end, but all in all we still got off with what I consider quite a bargain. I highly recommend it if you’re ever in town, sans a great sum of expendable money.

After that thrilling experience, we took ourselves back to our toasty little hotel room to see what British/Scottish TV had to offer us and enjoyed a taste of what the United Kingdom has to offer in terms of game shows, such as Family Fortunes, and the British version of Who Wants to Be a Millionaire, the name of which I can’t currently recall. Eventually we landed on a channel called “Dave”, and discovered the humour of one Russell Howard, and there we spent our night.

In the morning it was bright and early to breakfast after a shower in the most incredibly small shower I have ever encountered (I bumped my elbows whilst washing my hair, for instance). The breakfast involved a hot selection this time, which was nice, even if my egg was a bit under-fried. Full of bacon, egg, cereal, and toast I headed off with Emily to handle the bulk of our Scottish sight seeing. This included heading to Calton Hill to view several glorious memorials, all perched beautifully on the hilltop there. On our way up the hill, we spotted two things of interest–one was a glorious Scottish cat and the other was a lost forlorn pair of pants (or, I suppose as I’m in the UK, trousers). I have to admit I love a good pair of lost trousers–it’s fun to imagine the different stories that would lead a pair of jeans to be snagged on a twig in the park in the middle of winter.

Having had our fill of the park, we journeyed off towards St. Giles cathedral, which is a gorgeous place in the center of town. Unfortunately, you had to buy a picture permit, so I didn’t get any pictures of the gorgeous inside of the massive old place. Much like Westminster before it, it seemed so full of history and splendor that my usual agnosticism was simply impossible. I was so awe-struck by its amazing beauty and massiveness that I actually sat down in the private reflection area, had a little prayer, and lit a candle. Something about old churches really resonates with me, I guess. Perhaps it’s the fact that there are former human beings buried beneath my feet and in the walls, or perhaps it’s the size, and the splendor.

Anyway, from there we headed to the museum, which was full of a surprising amount of fabulous old stuff. We saw old coins, old weapons, and even old remains of dead people. Yep. Skulls.We also learned that it was once common practice to carry a phallus-shaped talisman (you read that right folks, a penis) in the pocket in order to ward off the evil eye and encourage fertility. Imagine explaining THAT these days. From that lovely exhibit, we headed on to look at some information about textiles and a bunch of other really cool museum type stuff. Once we tired of history (for the moment, anyway) we wandered off to see the famous Greyfriar’s Bobby statue and had a brief look at the graveyard before we decided the atmosphere was decidedly creepy, if only because it was inexplicably so much colder in there. Off past the bagpipers, yet again, we searched out our lunch down the Royal Mile, eventually settling on a pub called the Beehive for a good jacket potato. There we were amusingly carded for “Challenge 25” which is where, if you look under 25, they check your ID to make sure it’s all good for you to be in a pub. Naturally, 18 being the drinking age, we were fine. 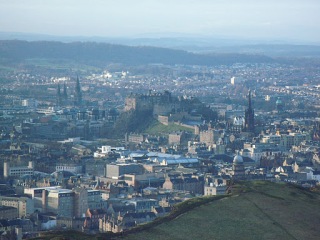 Refreshed from lunch ,we decided almost on a whim to climb Arthur’s Seat, a lovely former volcano that overlooks the city. Being as gloriously fit as I am, it was a bit of a challenge, not least because it was rather muddy at parts and the steepest incline I have ever encountered, but it was WORTH IT. The view from the top was MAGNIFICENT. No picture can ever do it justice, and I say to you now that if you’re ever in Edinburgh and you do nothing else, CLIMB IT. Don’t think about it. Just DO IT.

Once we (slowly) made our way back down to safer levels, we felt deserving of a break for some tea and scones, and stopped in to a cute little tea shop where I had cream tea, to which I am now thoroughly addicted. Cream tea generally consists of the house tea and a scone (or two, depending) with clotted cream, jam, and butter. A heart attack, surely, but a delicious one at that. From there we dragged our weary selves back to the hotel to relax for a little while before we dared take on more of the city. We enjoyed a bit more glorious comedy TV and then headed out for a quiet dinner in, you guessed it, another pub. After dinner, we wandered through the National Gallery for a little while before heading back to the room for a nice quiet evening and some much needed sleep.

But the story doesn’t end there! Although Sunday marked our trip home, it also marked two significant stops on the way. First, we stopped at Chester’s Roman fort, which is a part of Hadrian’s Wall. That’s right, folks. Hadrian’s Wall. I stood on a bit of Roman history, and it was magnificent. Even if it was also incredibly cold. 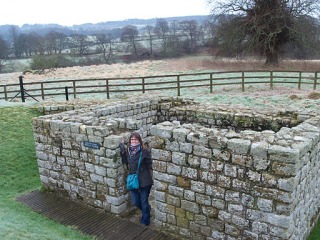 After the wall, we headed on to Durham for lunch and a look at the GORGEOUS cathedral there. Seriously, that building is amazing. GO. I urge you, religious minded or not, to have a look at the amazing architecture. And, it’s free. Unless you want to climb the tower. Sometimes being a badass costs extra, and having climbed a mountain the day before, we decided to give that one a pass. Afterwards, we did a little shopping, most notably in the Oxfam bookstore, which is gloriously full of old books. Then we grabbed some baked goods, got on the bus, and finally headed off towards home sweet castle.