First things first, internet people–Happy Valentine’s Day! I hope it’s dripping with hearts, love, chocolate, flowers and all that jazz. And if it isn’t, don’t despair–count yourself one of many who like spending the day eating too much chocolate and trying NOT to think about what those “happy couples” are doing with their day. Now, enough of that “holiday” nonsense and on to what you really want–the next installment of my trip to Dublin! 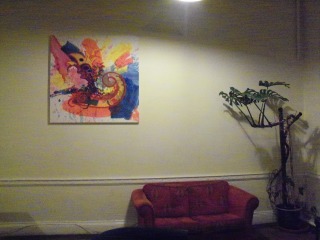 Woke up bright and early on the top bunk in a room with 16 beds, total. Had a quick breakfast of toast and tea, rented a towel for 5 euro (3 of which I’d get back so long as I didn’t decide to run off with the world’s thinnest towel) and went to investigate the shower situation. One thing I don’t recommend when staying in a hostel is forgetting to pack your shower shoes. Didn’t wear my contacts in the shower to avoid looking at whatever I may or may not have been standing barefoot in. Thankfully, Mount Eccles Court was quite clean, and I probably didn’t contract anything awful. I pressed the single button and learned what that meant at last–lukewarm water that only lasted about 30 seconds after you let go of said button. After an awkward shower with one hand pressed on the button while the other hand tried to get my hair some sort of clean, I got dressed and prepared for a day out on the town with my lovely ladies Gina and Shannon (Lesley and Cassie, the rest of our intrepid crew, had a bus tour scheduled for the day).

We trekked off to the National Gallery to look at some gorgeous art, popped in to several shops, including a few of your typical tourist stops, and had lunch in a cute little cafe. Gina and I had delicious vegetable soup and homemade brown bread, and I had the joy of savoring a Diet Coke right out of the can. 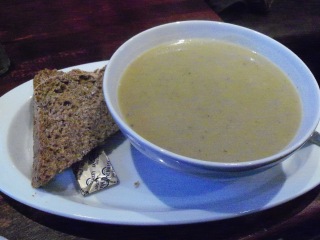 From there, we moved on to the National Library to check out an exhibit on W.B. Yeats, where we had the joy of seeing some of his original manuscripts and a case of his various high school awards. I got stars in my eyes and imagined my Power of the Pen trophies sitting behind glass one day. It’s not exactly likely I’ll be as well known as Yeats, but it’s good to have dreams, right? 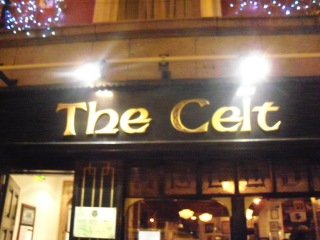 After that, we did some more wandering and just generally trying to get used to the layout of the city, stopped in for a snack of tea and scones (naturally) and headed back to our hostel to relax and wait for Cassie and Lesley to return so we could all hit the food hall for dinner.

Chinese buffet at the food hall for dinner–tolerable and cheap, words I’m using more and more as I continue my travels. From there, we split up–Gina and Cassie headed back to the hostel for a night in and Lesley Shannon and I embarked on what would become a great pub adventure. Did a lot of searching for a place that fit our requirements–not too crowded, not too empty, preferably live music, and not too touristy. We were on this trek for a while, but finally ducked in to a little place called The Celt, where we found a table and I found out I like Smirnoff Ice. Asked a local to take our picture, which resulted in Shannon’s getting chatted up by him for a while while Lesley and I cracked up laughing because he was easily a good ten years our senior. 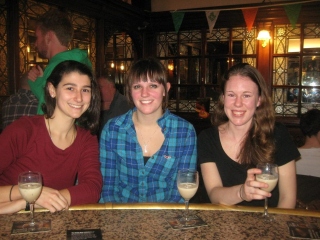 We moved on from there to check out a place we’d seen earlier, Madigan’s, because they’d had a sign out about live music. Sat at the bar, where Shannon treated us to a round of Bailey’s and I discovered there were TWO alcoholic drinks I liked (things are getting a little dangerous, aren’t they?). The bartender was about the nicest person I’d ever met (though, this is a hard thing to bestow in Dublin, where EVERYONE seems to be nice) and treated us to some free waters (not so easy to come by in Europe) with black currant juice added. The live music began, the singer called a great deal of attention to us, referring to us collectively as “Indiana” and asking us how “Mr.Jones” was doing–a joke that took us a minute to understand. This, naturally, drew the attention of some locals and we got “interviewed” by and Irish boy–we were a little skeptical because, though he DID have notebook and pen, he asked us what our ideal first date was and about our favorite “chattel lines,” which after some explanation we learned was the Irish equivalent of a “pick up line.” About an hour later as we got up to leave, said group of local boys invited us to have a drink with them, and naturally we accepted. Thus ensued a long night of us getting to know some real Irish boys and enjoying the singing and general atmosphere of the pub. We headed back to the hostel while celebrating our night of successful travel experiences, ready to catch entirely too few hours of sleep before our last full day in Dublin would begin.

Join 1,482 other followers
Follow Your Book Friend on WordPress.com