Would you believe I’ve been managing reading outside of my grad school workload? So far, I have been sneaking in some reading time before bed and been listening to audiobooks, so my reading life is alive and well (even if my blogging one isn’t!)

My friend Erin has been recommending the All Souls Trilogy to me for a long, long time. Finally, she physically handed me the books, which means I finally got around to reading the first one. She wasn’t wrong that it was up my alley, even if I had some issues with the book because the feminist part of my brain won’t shut up. 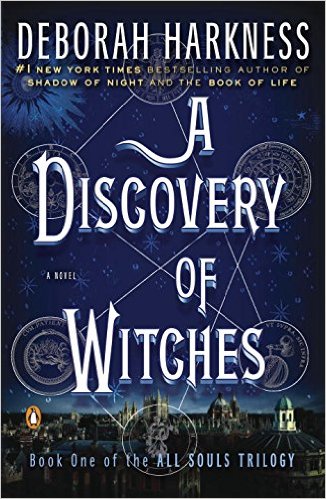 A Discovery of Witches is kind of like Twilight plus witches, minus the werewolves (so far anyway, fingers crossed for books two and three). As a kid, I read every witch and vampire  book I could get my hands on, and my love of supernatural remains unscathed, even if there was a slightly cooling period during the great Twilight-spawned bloating of the market back in high school.

This book’s vampire is a bit more overtly dangerous and honestly kind of an asshat some of the time. The problem is that his controlling behavior is really irritating, especially when the main character is a freaking witch and should be able to take care of herself. Except she can’t. For reasons that, yeah, kind of get explained later, but still. Diana does sometimes stand up for herself against Matthew, but more often she flees into his arms and cowers. Which was a little hard to handle as an adult woman versus how I handled Bella’s behavior as a 14-year-old.

Still, the book definitely has a compelling narrative to it and is well written, pulling you through the story quickly. Diana is more of a round character than Bella, and she certainly sticks up for herself more often. Things get weird towards the end of the book, in a way that keeps you hooked and makes the book more than just a straightforward paranormal romance, which I appreciated since the romance stuff was kind of cringeworthy at times for me (for feminist reasons). It ends on a major cliffhanger, though, so have the second book ready at hand if you find you’re enjoying the first!

4 thoughts on “Amanda Reads: A Discovery of Witches”